How I Got Into Using a Hercules Hydro Pump, and What There is to Say About it

Funny as it is, the first place I saw the Hercules hydro pump was on the comedy show Tosh.0.  It was the focus of one of the sketches, and needless to say, despite being apart of a joke, my interest still peaked. I imagine you went through the same thing when you first came across this water penis pump.

And so I learned more. 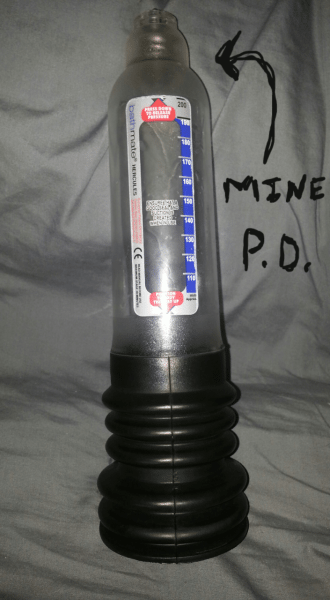 This is the Hercules, which is a beginner model.

A Slew of Impressive Testimonials

This may sound cliche (as most reviews do online these days), but everything I saw -Testimonials, reviews....all were glowing.  Better yet, It seemed that other people like myself were interested in learning more after seeing it on TV, and those that had it were pointing them to some pretty convincing stuff.

One convincing testimonial came from a guy who laid out his extensive routine, that he dubbed: DLD BathMate Girth Blasters.

Now, after seeing his full routine, you probably realize that this guy is slightly obsessed with his wiener, as he created his own workout routine for it - heck, he coined his own name for it!

I'm not particularly that devoted to mine, nor do I care to adapt an intricate routine around it (at the time anyway), but it still is reassuring to hear that if you put in the time, you see results.

If you had asked me what I thought about this pump after using it the first time I would have said it was crap. I had a horrific first time experience with it. Very embarrassing and very uncomfortable. Nearly burst a testicle, passed out, and hovered over the toilet waiting to vomit. This all happened for a number of reasons...

Yup, don't be an idiot like me.  I did absolutely everything wrong, and by the end of it I was pretty traumatized.  You could say I wasn't 'thrilled' with the results either...

Needless to say I was ready to return the thing, but another round of reading testimonials got me to try it out one more time. The results the 2nd time around were much, much, much better. I finally saw what everyone was talking about.

Once I got past all the mistakes I mentioned above above, I ended up seeing some solid results.

A bigger head, rock hard erections, and a heavier hang? These are the kind of results a guy (and his gal) can get used to. It took some time to "figure" this brilliant device out, but I can now confidently say that I've mastered it. I

Despite a rocky start way back in 2012, I am still very pleased with my purchase. The idea behind the product makes sound sense, and I can say I am glad I held onto it. Fast forward to now, and I'm still glad I stuck with it! The results are clear; I am much harder, my flaccid size, head and girth are all noticeably bigger. So, it really isn't a matter of IF I will even see results (because I already am), it's a matter of how much. Because of that, I 100% recommend you get one for yourself. It works.

Remember, they will give you your money back if you aren't satisfied with it.  I know you will like it, but if you don't then you can get your money back.  Also, Thanks for reading this review, hopefully you found it helpful.  I will be updating this site to keep you informed as I continue using this product, so feel free to bookmark, subscribe, or share with a friend.

Today, the Hercules is just one of the 6 sizes of hydro pumps available. Using the correct size allows for optimal suction that feels and works best. Don't overlook this. To save you time, here are all the bathmate sizes and measurements to make it easy for you to pick the best one. And as a heads-up; at the bottom of that page is a special coupon code you can use to get 15% off your purchase -so don't miss out on that.

If you want grow your penis, you'd have to sift through all the crap out there.  There are loads of scummy, crappy products littering the internet that do not work.  However, there are a number of things that do.  Jelquing, stretching, and pumping all do work. I do it from time to time and so do many other guys, and you really do notice a difference. The thing is, most guys (including myself) get tired of yanking and squeezing their ding dong every day. This is where products like stretchers and pumps come in. They are appealing because they do all the work for you. Even urologists know people are lazy, and prescribe pumps to patients that want/need harder, straighter erections. The plain fact of the matter is they work, otherwise doctors wouldn't be prescribing them.

Conventional pumps have been around forever, and have evolved from simple air vacuum pumps by hand, to full blown electronic contraptions equipped with sensors, a slew of settings, and a massive price tag...

What makes the Bathmate pound the competitors, is it has evolved to an entirely new level. Air has been replaced with the forgiving, comfortable nature of water. Warm water loosens tissue better than air ever could, and the best part is... it feels goooood.

Next Up: What happened after 1 whole year of hydro pumping.