Vaping has gained steam as a smokeless and safer alternative to cigarettes. While it’s true that e-cig vape contains less carcinogens than traditional cigarettes, it's certainly not safer.

For starters, it is considerably easier to reach toxic nicotine levels with vaping than it is cigarettes. Secondly, a recent study published in the Journal of the American College of Cardiology found the flavorings used in vapes to be dangerous to your cardiovascular health.

The combined destructive nature of nicotine and toxic e-liquid flavorings could be a recipe for serious cardiovascular damage, which is known to wreak havoc on sexual health.

The ground-breaking study, supported by health organizations like the American Heart Association, National Institute of Health, FDA, and others, is among the first to shine light on the ill-effects of e-liquid flavors. There were concerns over the potential toxic nature of the chemicals once heated, but now it's known for sure they can produce negative effects.

How toxic e-liquid flavorings impact the cardiovascular system starts with how they release chemicals into the blood stream that cause dysfunction in the smooth mission-critical lining of our blood vessels, or more specifically the cells within them: endothelial cells. 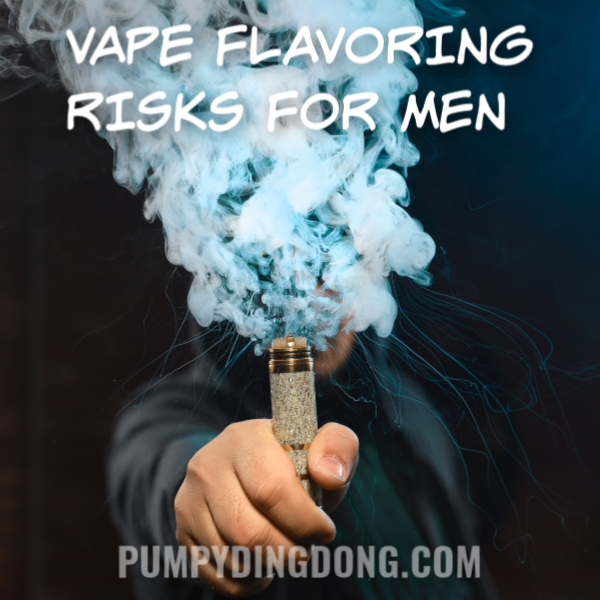 In the study, exposure to the flavors caused endothelial cells to exhibit dysfunction in their ability to migrate to heal wounds and survive. This dysfunction was in part due to oxidative stress caused by the e-flavors. Some e-liquid flavorings were more destructive than others, but each of the 6 flavors tested show signs of creating endothelial dysfunction.

This is particularly bad for men because endothelial cells are responsible for growth of new blood vessels and the production of nitric oxide, which are mission-critical components in both cardiovascular health and unleashing erections. Less production of nitric oxide (N-O) in the body is directly linked to a great number of health complications, because N-O is a vital component in many bodily and cellular functions.

Possible Effect on The Penis

N-O's role in penile health is particularly important. It works as a master signal that starts the erection process within the penis, telling the smooth muscle to relax and penile chambers to engorge, and enabling blood vessels to dilate allowing more blood to enter.

It's known that men with lower N-O levels produce weaker erections. This problem only grows greater over time the longer N-O levels remain depleted, increasing the likelihood of Erectile Dysfunction, in which the man may be unable to conjure an erection.

Erections play an important role in revitalizing penile tissue with oxygen, allowing the tissue to remain elastic and healthy. When a man is unable to produce erections, penile tissue loses its elasticity and shrinks.

As men age they naturally produce less erections, and it is said that this effect can reduce a mans penis size by 33% in his lifetime. By age 40 a man produces 50% less N-O than he did when in his 20's. This indicates the possible impact on size activities like vaping can have on the penis. If an activity reduces N-O then it is within reason to believe it will also affect penis size.

If you have a question please submit it through my contact form.
Go to mobile version