Raised by parents and adults who have nothing good to say about their generation, young men are finding it difficult to find their place in the world and are turning their back on it.

And rightfully so. Older generations have alienated younger ones, making them strangers in a society dominated by older, more successful generations.

The evidence of generational hate is all around us. The clickbait and fake news stories for it are only increasing. There’s been a huge increase in searches for generational terms like gen-z, millennial, boomer, and gen-x. The reason is because it’s become the norm to use these terms to describe ourselves and others.

But mostly the media has taken a pre-existing phenomena and refined it into a successful content category that gets shares and hits. 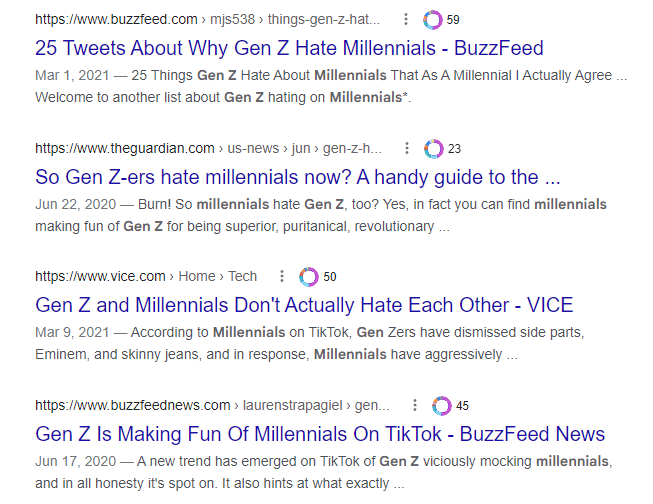 In the generation wars, no one wins. 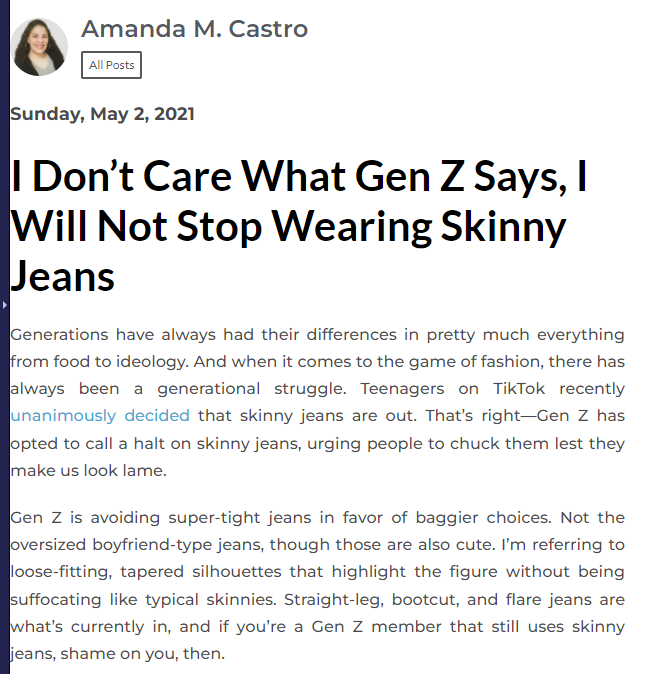 This journalist slams any “zoomer” for wearing skinny jeans.

The content has taken a turn for the worse to make it seem like everyone hates a generation, further isolating a generation. 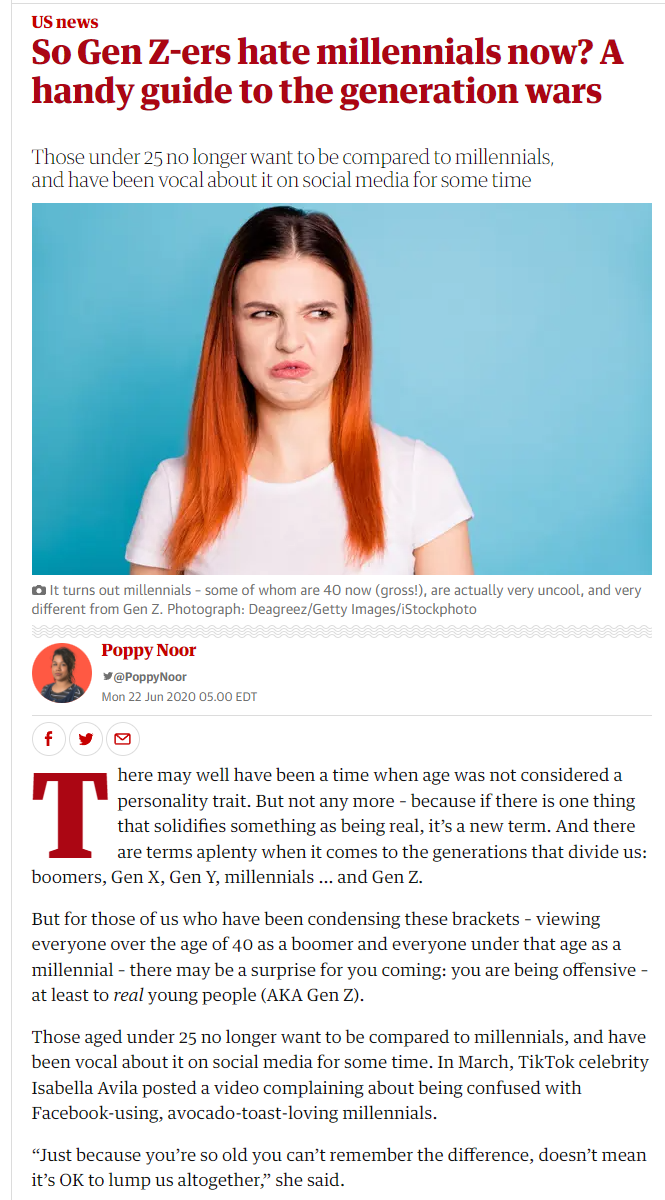 The media loves to pit generations against each other.

Some even rank generations….

Ranking generations is a great way to keep the hate going.

As a young adult we trust older generations to endow us with wisdom necessary to thrive in life. But instead of wisdom young men today are treated as outcasts that deserve to suffer for their perceived faults and have a hard life.

Older generations actually hope younger ones have a terrible life so they can “wake up”. Some parents even make comments that elude to this… like:

“Your generation has no idea…”

“Your generation is terrible at…”

“Your  generation is lazy and wants everything handed to them.”

These are all things older men say to younger men. Rather than help them succeed they insult, degrade, and judge them.

Young men are told these things to the point of being gaslighted –by media, teachers, parents… people of authority and old men who scoff at them in public places, to believe that they are incapable, weak, and broken.

At some point in the last decade things took a turn for the worse. The current generation of the time started becoming adults and had become the enemy. This phenomenon is beginning to happen to the younger generation as they begin to enter society. It’s a normal part of life but what’s different is that rather than the focus being on the youngest generation it’s beginning to be targeted to the perceived “worst” generation. The rules have changed and now there’s a perceived hierarchy among generations, with the youngest one no longer the most hated. Because of this the divide between all generations has deepened.

What effect is this having? It may be reducing our empathy. Studies are showing that empathy is on the decline, which means we have less compassion for our fellow man. A decline was first found between 1979 and 2009, with a “steep decline between 2000 and 2009.”[2] This is troubling, but if young adults feel less welcome, feel vilified and lied to by older generations, why would they have compassion for them?

Research on Generations is Being Weaponized

Generational hate starts innocently with the release of a report that highlights the special, unique characteristics of the youngest generation. Companies use this to understand trends and forecast the future. Adults use it to help them fear young people less. But at some point, probably when someone of influence feels threatened or disgusted by another generation, the information gets turned into a weapon.

The trends of a generation become weaponized into stereotypes used against the generation to help other generations feel better.

“Why don’t you go have an avocado toast…”

“Shouldn’t you be playing video games…”

All so we can be slandered in petty ways and laughed at.

“Don’t you have a phone you can look that up on?” commented the older man to the younger one as the older crowd watched, breaking out into laughter…

and that’s just the tip of the iceberg.

You can find this happening in environments dominated by a generation. But rather than the outcast generation bowing down, something else happens…

they find their own way. This is how new trends start.

Generational hate spawned out of the medias need for clicks and views. All to sell advertising.

But our natural disdain for younger generations comes from our fear of change.

The media knows this and exploits it. It would have us thinking that the younger generation will destroy everything we love and do so with a smile.

And so we become willing to gaslight an entire age group just to keep them from performing to their fullest potential, so we can protect what is sacred to us.

But this is only part of why the divide is getting worse.

The world is changing faster and young men are not getting the support they need.

The directions given to young men lead nowhere. They lead nowhere because they were made for a different time. The landscape has changed and there are roadblocks where turns are to be made and deep canyons with no bridge.

There’s no easy fix for this and the divide will continue to worsen so we shouldn’t expect it to change anytime soon. You can google “generational hate” and only find content on foreign countries, and nothing about how the media is turning men against each other. The problem hasn’t gone mainstream and probably won’t for a long time.

We can’t wait for society to change because young men’s lives depend on us.

If you are reading this your mission is to pass valuable skills to a a younger man. You can do so by taking on an apprentice and teaching him what you know. Help him develop skills so he can do the same for the next man after him.

If you are comfortable in life and have time, use that luxury to learn an in-demand skill that you can pass to the next generation. The world is changing so fast that younger generations can’t keep up, and it’s up to the older ones to help bridge the gap.

A young man that isn’t supported will rely heavily on his peers. This means he lives in an echo chamber, where the collective thoughts of his peers becomes his own. You can see this happening on social media. Social media sites are becoming less of a melting pot and more of an echo chamber for generations. The effect of this echo chamber is resulting in a significant amount of negative groupthink, like young men falsely believing they have a mental disorder because their peers believe say they do.[3]

In many ways, being a young man today is harder than it is was in the past. Today there are more sources of distraction that have eroded our ability for self-control. This doesn’t mean young men are undisciplined, it means they are struggling because there’s so much more to process now, and it’s only getting worse.

These distractions exist because society allowed them to. it’s simply not fair to ask young men to be a test subject and fix the problem. In the end it’s they who make the sacrifice for the next generation.

It’s normal for older men to think younger generations are not succeeding because they aren’t doing things the way they did, when they can’t. They can’t do what older generation did because the forces that exist today make it impossible.  In the past you could make a livable wage working an entry level job, even buy a house… today houses and cars are so expensive most young men can only dream.

Young men dream of having what older generations have, but that dream has soured and created anger.

Young men rent everything, own nothing, and have inherited all of the problems.

No one wins the generation wars, but it’s the younger ones that suffer the most. The wars may never stop, but the men reading this can help change a younger mans life by offering them support and teaching him skills that improve his life.

And maybe eventually, instead of passing down problems we will start handing off a better life for all of mankind.

[3] Why “TikTok Diagnoses” Are on the Rise | Psychology Today