Chances are for most of your life you have gazed forward while valiantly standing atop a mountain with dingle-dangler unleashing torrential rain upon the valley below below —or at least, that’s what it can feel like when a man pees standing.

But as you stand on your mountain valiantly, have you ever wondered whether the risk of peeing from such great heights is worth it? Should you instead safely and assuredly sit as you have a wee?

From an early age many men are taught to pee standing up. It has been considered the most masculine way to answer the call of nature for centuries, and maybe even, the only way a real man can pee. 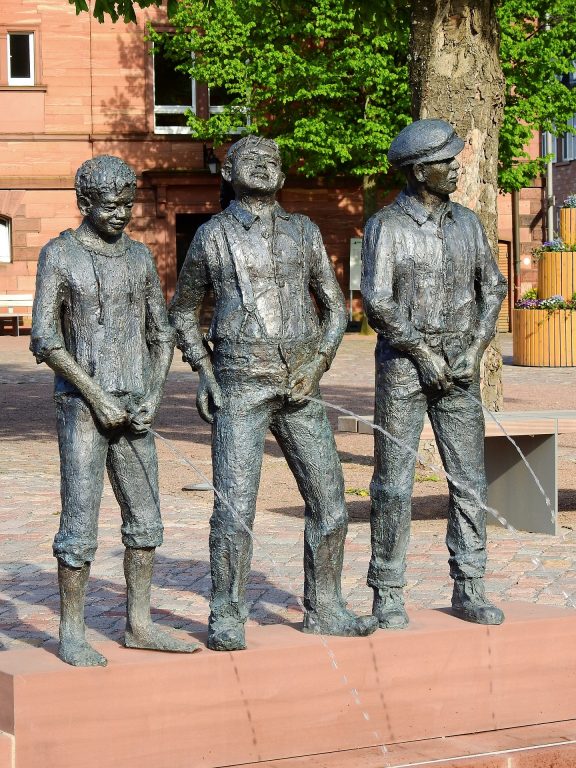 It’s considered manly in Western cultures for men to pee standing up.

Standing is common in western countries, where it is widely considered manly. In fact, married men who sit are considered “whipped” by their wives and have no power in the relationship. Single men who cannot stand and pee around other men are considered “pee shy” and therefore weak.

To pee while standing displays man’s strength, health, courage, and tremendous ability in performing highly complex tasks all at once. The strength to stand, the health to release a full stream, and the courage to risk ones life while cool and calm to complete such a complicated task multiple times a day displays man’s virility.

Any man who witnesses such a display knows that the man is indeed, a strong man. Women know he is worthy of reproduction.

And as a man ages the difficulty of doing so becomes riskier and even more complex as his strength, health, balance and dexterity become challenged.

But courageously, a man who has made it apart of his identity, will choose to risk it all just to prove to himself and others his stoic strength.

Men who come back from the brink of death have shouted victoriously as they are once again become able to stand and pee, as it is a sign his strength and health has returned.

They exclaim “I can pee standing up!” to thunderous applause.

Others have cursed at the heavens just for a chance to pee standing up, to reclaim independence.

Some men valiantly fight the grasps of death itself to stand and pee. These men proclaim, “You may take my health, but you may NOT take my manhood!”

And contrarily, men have used their ability to continue peeing while standing as a reason to not see a doctor. “If I can do it, then I must be healthy,” they say.

Why Sitting to Pee Can be Bad

There are definitely times when peeing standing up is a must. Like the urine soaked toilet seats in public restrooms, or the vault toilets at state parks that sit atop blackholes that shoot cosmically cold air up your backside or possibly has cryptic animals waiting to jump up and eat your nuts.

But hey, what about sitting down?

Is it worth it?

Is it even possible?

Toilet seats can be small and if they are full circle instead of the U-shape then you are forced to lean to the front or side just to tuck your dingy under the seat, then arch forward to get the right angle. A miscalculation in angle can allow pee to shoot straight through the gap between the seat and the rim of the toilet, making a mess on the mans legs and pants.

So, it’s possible. But it’s not without it’s difficulties.

When the angle is right, sitting is said to be more hygienic. This is because pee launched while standing breaks up into droplets that hit the toilet with enough force to send send tiny droplets of urine all over the place. Having pee launched every direction is considered unhygienic because it enables bacteria growth everywhere it comes in contact with.

The splashback is worse for urinals, as it splashes right back at you like a bunch of basketballs rebounding off a backboard, right onto your frontside and hands.

The video below demonstrates the splashback from a standing pee stream.

There’s also the chance of the stream going rogue into directions the man is not aiming for. This can happen when semen has dried in the urethra causing a temporary blockage that redirects the stream. This is more of a problem when using a toilet.

The further you are away from the toilet, the greater the splashback, so tall men may find sitting especially helpful in reducing mess.

You can try to minimize splashback by angling the stream instead of hitting the bowl or urinal straight on. It helps a little but there will still be more splashback than if you were to sit.

Sitting to pee was almost as effective in helping men with lower urinary tract issues (LUTS) to relieve themselves more efficiently and effectively as the commonly prescribed pills, but is without side effects and totally free.

As men age our prostates tend to grow in size, some of it is believed to be a normal part of aging, but some is also because of the foods we eat. Men’s prostates can enlarge and agitate the muscles around it and the bladder itself, making it difficult to release a full stream and even empty our bladder fully. Research has shown that prostate problems cause up to 90% of all lower urinary tract symptoms, such as poor flow, bladder cysts and stones.

When men pee sitting down research suggests they empty their bladders more quickly and effectively, which saves time and may reduce bladder problems. This is because the sitting position helps relax the muscles associated with peeing (pelvic floor), which allows urine to flow more freely. This is especially helpful for men who have enlarged prostate.

Older men who fear falling may also be unknowingly contracting the pelvic floor muscles more to maintain balance. Sitting can help them to relax them and pee faster and more fully.

If you are peeing a lot at night, sitting to pee before bed can more fully empty your bladder, meaning less trips to bathroom.

For young healthy men, sitting to pee may not provide any noticeable benefit, other than being more hygienic.

Reason #3: You Have to Poop

Standing to pee when you also have to poop can be extremely difficult for men, sometimes feeling like the pee pipe has been shut-off entirely.

When your pelvic floor or muscles around it (hip and butt) contracted, less pee comes out and you have a harder time emptying your bladder fully.

When we sit the inter-abdominal pressure raises which helps to relax the pelvic floor making it easier to pee and poop.

It’s possible to strain the pelvic muscle by pushing too hard in effort to evacuate the bladder more fully as we stand. When over-strained the pelvic floor can become chronically tight which can make it even more difficult to urinate or even cause leaking of urine after peeing.

When you have a chronically tight pelvic floor the muscle group cannot fully engage in the appropriate range of motion to close the urethra, which can cause leaking of urine. If you notice yourself dribbling after peeing it can be because your pelvic floor is too tight, or too weak.

If it is too tight then you may want to consider sitting to help it relax and reduce strain.

Should You Sit Because Women Asked You Too?

Women appreciate it when men sit because it saves them from having to wipe off spray or accidently sitting on it, which they consider gross.

However, men should not take all the blame as women’s streams come out at a faster velocity and volume which creates significant backslash on the under belly of the seat and rim.

They also don’t realize the complexity of sitting. A man has to tuck and risk the possibility of peeing through the rim if they get the angle wrong, potentially peeing on the back of his pants or legs. It’s rare, but always a possibility.

Women have it easy when they pee and don’t understand the thrill and satisfaction men get from standing to urinate.

While it’s considerate to sit and better for you in the long-run, if peeing standing up is your last defining aspect of your manhood, then keep on standing on. It’s not healthy for men to concede in all areas of their lives to please a woman. It’s also not acceptable for women to dictate what you do with your body, as that is a personal decision for you to make.

When To Consider Sitting

Evidence shows that sitting is the best position for men with urination problems.

A man who develops prostate and urination problems but refuses to take a seat is communicating he has little adaptability to change and will cause unnecessary problems for himself and others. This level of refusal is common in men who have a very specific idea of what a man is, and choose to stick to those ideals no matter what.

However, stubbornness should not be the defining characteristic of a man, his resilience should, and to be resilient he must adapt to change. If you notice you have less flow in your stream and have prostate problems then sitting is a simple change that can help improve urination quality and quality of life by improving hygiene, reducing bladder complications like stones and cysts, and saving time.

Hygiene is an import quality in men that women find desirable, and sitting is a simple way to improve it. But, you should be doing it for more reasons than just to satisfy women. It should be done because you care about your health and quality of life.

It may feel odd to some men at first, but the benefit of emptying your bladder more fully, and spending less time in the bathroom means he has more time to conquer the world.

While sitting to pee is an easy way to improve urination, if you are under 50 and have to sit just to pee at all then you’re overdue for a trip to the urologist, as young men shouldn’t experience age related prostate enlargement or difficulty peeing.

And certainly don’t use your ability to stand and pee as a reason to not go to the doctor if you are having health issues.

[3] Urinating Standing versus Sitting: Position Is of Influence in Men with Prostate Enlargement. A Systematic Review and Meta-Analysis (plos.org)

[4] 5 Symptoms of a Tight Pelvic Floor and How to Release the Tension | Livestrong.com