You ever buy something expensive online, then spend days waiting and worrying it won't be worth it?

It’s a terrible feeling, isn’t it? And that’s exactly how I would have felt had I bought the Xtreme when I first came across it --when it first came out.

And do you know why you feel that way after buying something?

The answer is simple really --it’s because you bought too soon.

Everywhere you look there are examples of people that pulled the trigger too early and bought something they weren’t ready for, often for short-sighted reasons like sales or looks.

Perhaps the best example out there is workout equipment. You know, those $900 all-in-one fitness machines that people often lose in a dark corner of their basement… where they remain unused…. 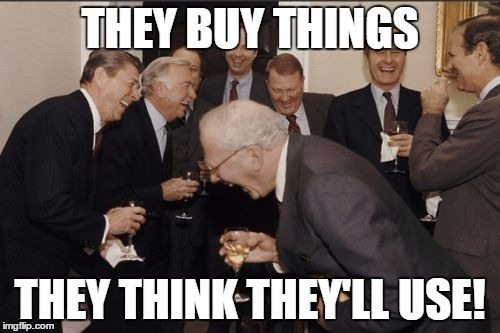 It happens a lot, and I believe it has to do with the level of understanding the person has for what they bought.

Yes, it’s easy to get excited of the possible results the latest equipment is raging about, but incredibly difficult to get them if you don’t fully appreciate the product...

and better yet, aren’t ready to commit to using it.

You may understand the deal, understand the value of saving money, but that rarely ever leads to an appreciation of the product. In the end all you ever did was save money on a product you were never going to use in the first place.

In the end, that’s all you ever appreciate when you look at it, sitting in the corner... not being used.

What does this have to do with the Xtreme?

If this is you, then keep reading on:

But plain and simply, you’re on the right page if you want something that will give you a bigger penis.

No one wants to be that guy with that pile of fitness equipment they never use. To others, that guy’s basement and wasteline is a visible representation of the lack of tenacity he has --and when that guy finally gets the gonads to sort through it --it becomes a visible representation of just how little follow through he has… and that’s when the buyers remorse sets in.

Fortunately, avoiding all of that with a Hydro pump can be an easy fix. It just takes a simple shift in thinking.

One way to effectively shut it out out forever, is to get experience with the product you want to use before you buy it.

For those with the unused workout machines --that means consistently working out on equipment before taking the leap into ownership.

This often entails paying for a month at a gym to see what equipment you like and if you have the tenacity to stick to a routine. It’s akin to conquering training wheels before buying a mountain bike and bombing down an Death Canyon Trail.

Unfortunately it’s not so easy with a hydro pump like the Bathmate. There isn’t exactly a place that lets you test each one out…

What most do instead, is start small --by getting a cheaper entry into the hydro pumping arena, like a Hercules, and relying on the money back guarantee to get an idea of how it works for them --without putting too much money and risk up front.

This is the most affordable way to gain experience with a penis pump, and a lot of people opt to go this way before going with the Xtreme.

For me, my experience came through 2 years of doing just that --using a cheaper Hercules, which in the end gave me valuable insight as to what I really wanted out of a hydro pump.

It was that experience that eventually led me to drop $300 to upgrade to the Xtreme --without even an inch of buyers remorse.

I can honestly say that after two years of using a Hercules, upgrading to the Xtreme was a no-brainer.

On Whether You Should Get an Xtreme

You’ve probably already heard about the Xtreme and don’t need me to bore you with the same tired details you probably keep seeing. So instead, allow me to share why after all these years, I chose to upgrade to one.

What got me to upgrade is probably not what you think.

If you’ve read this blog you’ll know I’m no stranger to Bathmate, especially the Hercules.

For 30 days I stuck to a consistent routine with it, then took a break to see if the results would stick. I then did the same thing again, but for 90 days. After seeing the results I made the decision to stick to using it a couple times a week.

Before I tell you about the results, let me tell you what I learned while using the Hercules.

In that time I learned a couple things:

The best seal happened when I used the pump while erect.
The best results came when I would alternate between high and low pressures.

One reason the Bathmate is so attractive is you don’t have the hassle of creating an entirely new routine around using it. You already shower, so all you have to do is wear it while going about your business.

I personally believe that’s why it is such an ingenious device, and why so many are interested in using it.

The first thing I learned came from a weird experience. After nearly a year having a Hercules, I decided to give intermittent pumping a try, which meant I would alternate from high/low pressures. I would pump up and hold for a couple minutes then lower the pressure and hold for 15-30 seconds or so. With each completed interval, I would slowly work my way up to my max comfortable pressure.

I read about pumping in intervals on a forum where a doctor stated it was the best way to safely pump. To me it made perfect sense. Pumping in intervals encourages oxygenated blood back into the penis, making it a much healthier way to use a pump. It also helps prevent other routine-crushing conditions that come along with over-pumping, which is a classic beginner's mistake I myself had made in the first week.

Just one problem. While intermittent pumping is a safer way to pump, it isn’t something that can be easily done with all hydro pumps.

With the Hercules, the extra pumping after each 15-30 second break to reach the original pressure made my pelvic area sore. Each time you push down on the Hercules your pelvic area acts as a base of resistance against the pump, allowing you to force out water and build up pressure inside the chamber. The more you physically pump the more force your pelvis takes, and for some, it’s enough to cause bruising. For me, it was enough to cut a day or two out of my daily routine to allow the soreness to dissipate. There was soreness, but no bruising.

In my 2nd year of use, conjuring an erection every time became more of a hassle than I cared to deal with. It got tiresome, which made it harder to keep going with a routine.

I got to brainstorming, and came up with a simple solution that would allow me to use the pump while flaccid (no erection). The fix was a simple custom cut strip of athletic wrap. I would wrap it around my flaccid self, then put the pump on like normal. This gave a bit of padding inside the pump as well as a great comfortable seal.

Doing this allowed me to use the pump without having to maintain an erection.

That was the second thing I learned, and it was an easy enough fix, although it did take some practice to get right.

2 years of use have driven home a couple major points. If you are going to take anything away from this post, let them be this:

Despite having to wrap, and the occasional pelvic soreness from the extra work of pumping in intervals, I kept to the routine, even if it meant I’d take a day off every now and then.

In the end, it was these takeaways that sat in the back of my mind that eventually drove me to give the Xtreme a third look.

I Already knew the price, already knew what it came with, already knew what results regular use could deliver --but the difference between this time and all the others, was that instead of seeing the $300 price tag, and closing the browser, I saw the value behind the comfort pad and the hand pump, and clicked the order button.

The difference this time was I had enough experience to tell me how important those features are to a consistent pump routine.

I of course also had a thicker, fuller cock, by about 1 inch in length, and .5 inch in girth growth. All done in the shower, often for half the recommended amount of time (10 mins).

Most people that use a Hercules as a starter pump end up seeing the value of the Xtreme, and it’s simply because they gained the experience necessary to look past the price tag.

If you’ve never used a pump, you probably were having a hard time deciding because you had zero experience with pumping, and were a little concerned whether it was worth it.

What you have to do is rely on others insight, hoping they are giving you an unbiased review after having used a Bathmate for quite some time.

Hopefully everything in this article gave you an idea of the value of Xtreme -because it is a powerful pump, and in the right hands, it can produce some great results.

I know I am looking forward to seeing what comes out of regular use with it.

If you have a question please submit it through my contact form.
This site uses cookies: Find out more.